A series of articles by Hugh Cochran, author of The Saints of Mid-Deeside. Hugh Cochran (b1932), BA (Oxon), LIB (Edin), BA (Abdn), FSAScot, worked as a solicitor in Aberdeen, the town of his birth until his retirement in 1998. In the course of his professional career, he was Chancellor of the Diocese of Aberdeen and Orkney from 1993 to 1998. Since then he has devoted his time to the study of his historical and antiquarian interests. 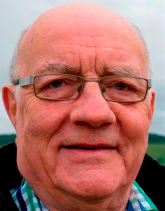 It is believed that there were between 900 and 1000 Parish churches in Scotland at the time of the Reformation, of which 96 were in the Diocese of Aberdeen. We are only going to look at 15 of these being the ones between Banchory and Braemar, and in some cases there is literally nothing to look at because the church that was there in 1560 was demolished and a new church built by the reformers. That is what happened at Tarland, Birse and Abergairn, so at least three of our 15 Upper Deeside churches were not considered in good enough condition to preserve. This is a surprising fact, because the Church was the largest land holding entity in the Medieval kingdom, whose influence touched on all aspects of the everyday life of the population at large. How did it come to pass that the Parish churches were allowed to decay at a time when the Church as a whole was not short of money? In Aberdeen alone, Bishop Elphinstone completed King’s College and founded the University in 1495, and Bishop Dunbar completed the Bridge of Dee in Aberdeen in 1527. There was no lack of money, and no lack of imaginative ideas. It was after all the time of the Renaissance. The sad fact is that since its inception in the 12th C the parochial system in Scotland was blighted by appropriations.

To understand this we must first understand what the parochial system was. The Latin word parochia originally meant an area within which a bishop’s authority was recognised and even in the 12th century it was still used in that sense. It was only gradually and towards the end of the 12th century that the term assumed its current meaning as an area within the jurisdiction of a baptismal church. However, as soon as we come up against the use of the term Parish in Scotland, we also come across the terms Teinds, Parsonage and Vicarage. Each of these words has a different meaning in different contexts and in different centuries, and I will try to give my best understanding of what each word meant in the context of the medieval Scottish Church.

Teinds had roughly the same meaning as the word Tithe, that is to say the one tenth of the produce of the land, payable as a tax by those who produced it. In most cases this would be the peasant farmer and it was payable to the Parish church. So far so good, but there were different kinds of teinds. In many arrangements, the corn teinds were assigned to the “rector” (or parson), while the lesser teinds, that is to say those of milk, butter, cheese wool, and the young of animals were set aside for the vicar. So, on this basis, the term Parsonage came to mean the corn teind, or at least the greater part, while the term Vicarage came to mean the lesser teinds. This reflected the greater status of the Parson while the Vicar was usually either younger, or less well educated, or less able or, I could add, from a less well connected family, than the Parson. Again, so far, so good. Had this been the whole system, it could probably have worked. But the effects of Appropriation have still to be examined.

Ian B Cowan states in his book ‘The Medieval Church in Scotland’ – “It has long been realised that the appropriation of parish churches – a process which involved the diversion of parochial revenues to other religious institutions or persons – was one of the greatest flaws in the structure of the medieval church in Scotland”. These flaws were recognised even before the Reformation itself, but they were so embedded in the structure of the church that it was not possible to make any meaningful changes. Added to which, this system was much more widespread in Scotland than in most other countries. One estimate of the number of appropriated parsonages is that about 700 were annexed to some foundation or prebend, leaving approximately only 260 free parsonages.

What appears to have happened, and the process started on the Continent, was that the authority of the local lay lords over the churches in their lands was originally almost universal. As a result of papal condemnation of this practice, from about the ninth century, laymen began to relinquish their churches to some corporation or to a bishop, and the appropriation of a church came to mean the transference of the income of the church derived from its endowed land and its tithes to the corporation to whom the gift was made. To begin with, there were doubts as to which rights were transferred, and every church was different, but in Scotland anyway these doubts were dispelled by the use of the Latin formula in proprio usus in the deed of gift. The use of this term vested all rights in the appropriator. Of course this meant that the church now had no income at all, and so the appropriator had to make some provision so that the church could continue as a viable entity. And this is where the trouble started. In order for the gift to have any value, the appropriator had to receive more than it gave. A typical case might be a monastery receiving the whole income from a particular church, and in return it had to provide for the ongoing expenses of running the church which were much the same as they are today i.e. the priest’s salary and the maintenance of the church buildings plus the cost of any good works carried out. As can be imagined, endless disputes arose over this question, and in almost every case the loser turned out to be the church. For example, it came to be in the interest of the appropriator to appoint a vicar rather than a parson which meant that they kept the parsonage teind for themselves, and only had to pay for a vicar who was a lower quality person as we have seen, and could be paid less. There are endless examples of different deals being struck, some it must be said quite generous to the church, but on the whole, the appropriators were the winners and the churches the losers.

As time went on it became the norm for the appropriators to absorb the whole teinds both parsonage and vicarage, and to appoint a vicar pensioner on a fixed salary, which gradually became of less and less value with the onset of inflation. If they made any provision at all for church maintenance, that was probably a bonus. Everywhere the burdens upon the vicars increased until they were unable to cope with them. So much money was siphoned off from the parishes to the cathedrals and monasteries that the vicar pensioner eventually turned to the one source of revenue open to him, that of mulcting his own parishioners. The decline of the vicarage system was accelerated by war and schism, and in time this led to a general degradation throughout the church. The system of appropriation, by building up the wealth of the ecclesiastical foundation to the detriment of the parish played a major part in the downfall of the pre-Reformation church and nowhere can this be more true than in Scotland in which there existed an unparalleled number of appropriations.

The next articles will focus on the Diocese of Aberdeen as it was in 1560 and will start to look at the particular churches in Upper Deeside.

The second article starts to identify the 15 churches that existed then between Banchory and Braemar.

This fourth article looks at the church at Banchory and the four churches in Cromar.